Capital of Craft pulls into Port

Capital of Craft IPA brewed by some of San Diego’s best.

“I approached Pizza Port this year to host the collaboration brew because they met the requirements for the size of the batch (90 bbls), packaging needs, and distribution,” says San Diego Brewers Guild Executive Director Paige McWey Acers regarding the decision to invite Pizza Port to host the brewing of this year’s Capital of Craft IPA. “They also hadn’t participated in it since the original collab brew in 2017.” The beer’s release is one of the most anticipated events of the annual San Diego Beer Week, which this year takes place November 4th through the 14th.

Along with Pizza Port, seven other breweries are participating in the collaboration: BattleMage Brewing, Culver Beer, Fall Brewing, Mcilhenney Brewing, Mujeres Brew House, My Yard Live, and TapRoom Beer. The seven collaborators were nominated by the breweries that collaborated on last year’s Capital of Craft, and as the brewers change year to year, so does the IPA. “The 2022 Beer Week specialty beer will be a crisp, tropical fruit-forward hoppy ale/lager hybrid,” explains Sean Farrell, Pizza Port Director of Brewing.

For the malt, we’re going with Hana barley, which is a Czech heirloom variety that should give an authentic, complex Pilsner malt flavor. For hops, it’s El Dorado, Sitiva, Moutere, and Nectaron, which will give nice tropical fruit citrus notes. We’re also going to be fermenting this one a little cooler and blending in lager yeast for a really clean flavor that will showcase those malts and hops better.”

The collaboration is already underway, and the 2022 Capital of Craft IPA is set to be released in conjunction with Beer Week, which is, for the first time, holding this year’s Guild Fest kick-off event at Surf Sports Park in Del Mar. Tom Kiely, Thorn General Manager and Brewers Guild member, explains the move, “We had a few venue types in mind and explored a variety of options, including Liberty Station, museums at Balboa Park, and Broadway Pier. We were also discussing having something centrally located, so North County residents could more easily access the event, and Paige remembered the Polo Fields from a small beer competition a few years back.” 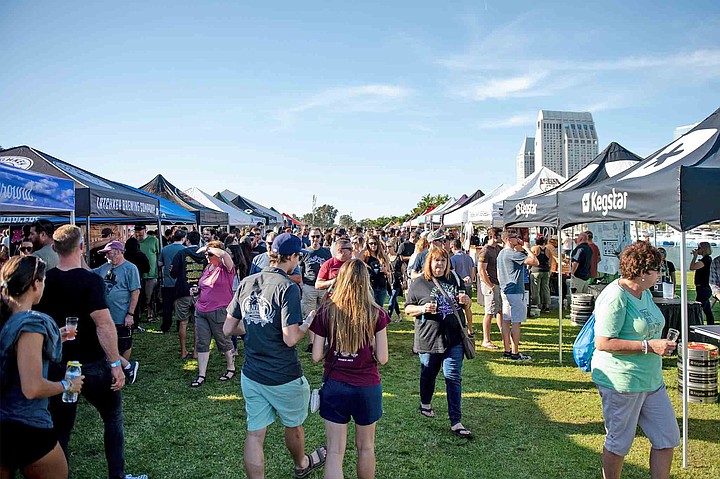 The first in-person Guild Fest since 2019 will take place during SD Beer Week.

Capital of Craft won’t be the only new brew on hand at the event. Continues Kiely, “We are launching the San Diego Estate Beer Project, which is an attempt to tighten the relationship between San Diego brewers and San Diego farmers by creating new styles of beer using ingredients which can be grown in San Diego County. We have also partnered with QUAFF in a homebrew competition, the winners of which will partner with professional San Diego breweries. And those beers will be featured at the festival.”

As usual, the November 13 closing event of Beer Week is slated for The Lodge at Torrey Pines, where an upscale beer garden will feature 28 breweries and 14 chefs. The breweries participating in the beer garden are chosen by lottery and will be announced at a later date.