Cheetahs could soon be EXTINCT in the African Savannah, study reveals

Cheetahs are an iconic animal of the African savannah, but scientists warn this majestic cat and other large carnivores are on the brink of extinction – and humans are to blame.

Along with the spotted mammals are wild dogs and hyenas that could soon disappear due to habitat loss, human persecution, and reduced prey.

Researchers with the University of Oxford found that the animals’ plight has been overlooked due to the focus on lions, leopards, and other top predators and regions like South Africa, Kenya, and Northern western and central Africa are under-represented.

Identifying knowledge gaps will improve conservation efforts by guiding funding, investment and priorities, according to scientists.

Cheetahs living in the African savannah are on the brink of extinction, but a lack of focus on the region has left the dwindling numbers unnoticed

Lead author Dr Paolo Strampelli, of the University of Oxford, said: ‘Research effort is significantly biased towards lions and against striped hyenas despite the latter being the species with the widest continental range.

‘African wild dogs also exhibited a negative bias in research attention, although this is partly explained by its relatively restricted distribution.’

The African savannah ecosystem is a tropical grassland with warm temperatures year-round and seasonal rainfall.

The savannah is characterized by grasses and small or dispersed trees and is the largest biome in southern Africa – covering 46 percent of the region. 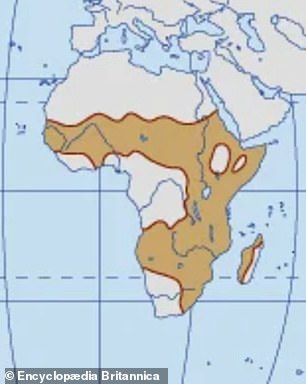 The savannah (dark, tan color) is characterized by grasses and small or dispersed trees and is the largest biome in south Africa – covering 46 percent of the region

Scientists estimate that there are fewer than 8,000 African cheetahs throughout all of Africa.

Due to a lack of scrutiny on the savannah, scientists cannot determine how many live in the region, but it is likely less than half.

Data from 2016 showed the population was around 2,000 and 90 percent live in protected areas.

‘Due to their large country ranges, studies in Chad and Ethiopia should especially be considered a priority.’

Hyenas flourish throughout Africa, with more than 100,000 individuals, but that number drastically dwindles across the savannah.

However, wild dogs suffer the most – an estimated 70 adults are left in the wild.

The study in the journal PeerJ is the first of its kind – based on a systematic review of population assessments over the last two decades.

The international team found biodiversity monitoring may not be evenly distributed or occurring where most needed.

Computer models showed assessments have been biased towards South Africa and Kenya. Northern, western and central Africa are under-represented. 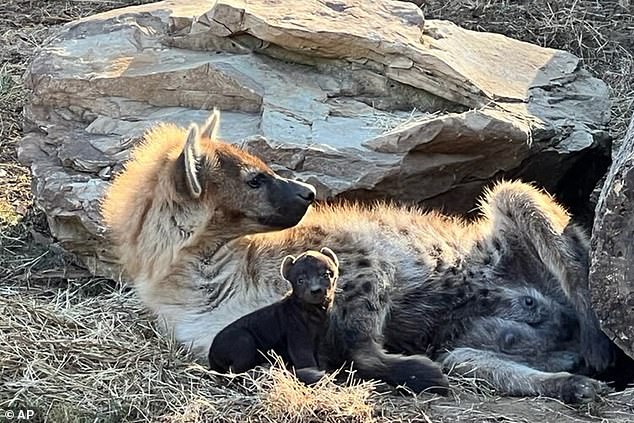 Hyenas flourish throughout Africa, with more than 100,000 individuals, but that number drastically dwindles across the savannah 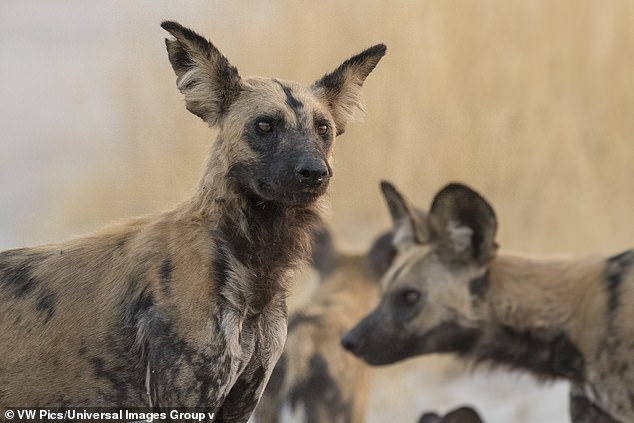 However, wild dogs suffer the most – an estimated 70 adults are left in the wild

Most studies have been carried out in tourism areas under government management; non-protected and trophy-hunting regions received less attention.

Reducing biases would help ensure all species and areas of conservation importance have an adequate knowledge base available, potentially improving their outlook, according to scientists.

Strampelli and colleagues called for donors and foreign researchers to maximize the involvement of local scientists, students and practitioners in future assessments.

Those include the provision of training, funding, and equipment. Donors and funders should encourage efforts in understudied regions and species.

This will ensure conservation occurs where it is most needed. Population assessments of striped hyenas are required.

Further population assessments of African wild dogs are essential, particularly given that the species is endangered.

Such efforts are especially required in countries identified as critical for the species.

No recent assessments have been carried out in some countries, including Botswana and Tanzania.

‘There is an urgent need for additional cheetah population assessments, particularly in northern, western, and central Africa,’ said Strampelli.

‘Due to their large country ranges, studies in Chad and Ethiopia should especially be considered a priority.

‘As in the case of African wild dog, development and standardization of cheetah population monitoring techniques, including the exploration of citizen-science based approaches, are recommended.’