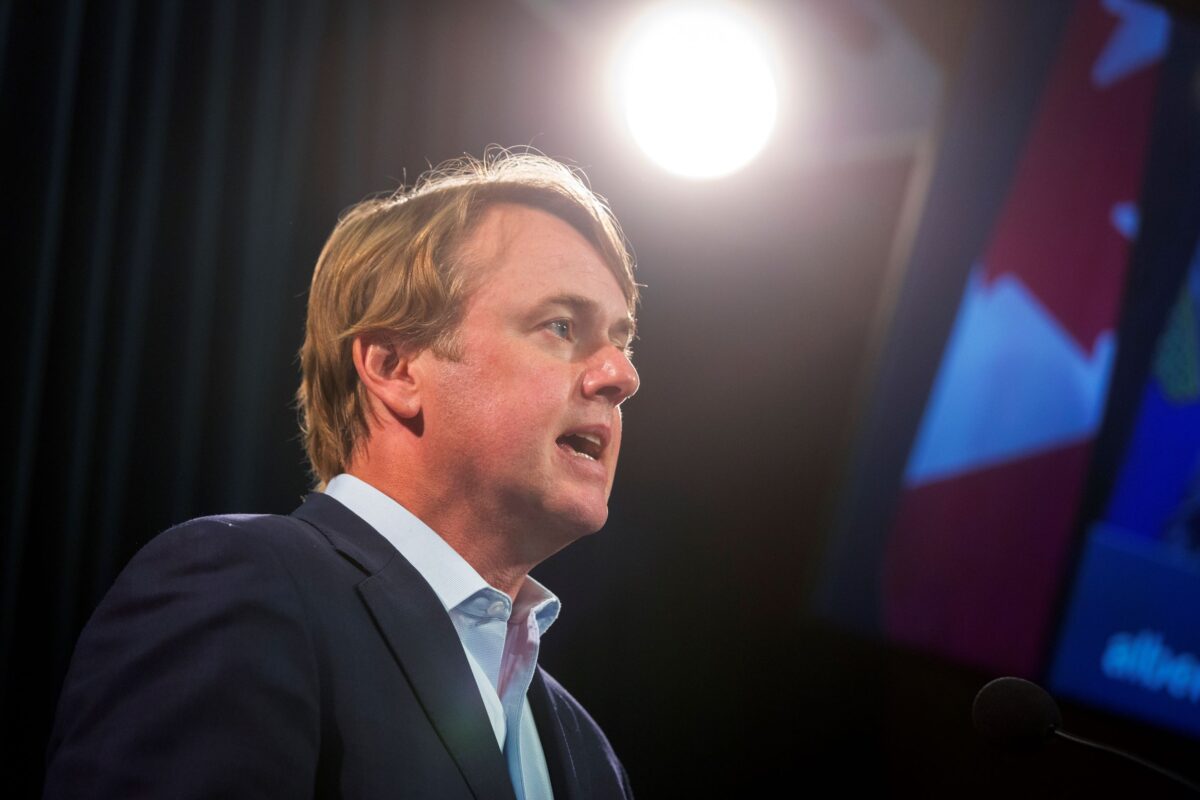 The Law Society of Alberta heard Tuesday a number of allegations about Alberta’s justice minister over suggestions he violated the profession’s code of conduct.

Tyler Shandro is facing three complaints dating back to his time as the province’s health minister early in the COVID-19 pandemic.

A Calgary doctorwho had posted a photo on social media of Shandro with a caption related to privatizing health care, told the hearing he received a visit to his home from the minister and his wife in March 2020. He said it occurred during fractious negotiations between the government and the Alberta Medical Association over fees.

The photo of Shandro, with a thought bubble caption, said: “So every Albertan that I can kick off health care is another client we can sign up for Vital Partners. We’re going to be RICH”.

Shandro’s wife, Andrea, is the co-founder of Vital Partners, a health insurance agency.

Dr. Mukarram Zaidi testified he went outside of his home to meet Shandro and described the minister as being highly upset as he demanded the doctor remove the post immediately because his family was being subjected to death threats.

“I see Shandro and his wife standing at the sidewalk. He was crying, he was emotionally charged. His wife was holding him,” Zaidi said.

Zaidi said he complied and felt that Shandro was visiting in his capacity with the United Conservative Party government and not as a private citizen.

The doctor said he is a member of the UCP, an activist and had known Shandro for some time.

Zaidi told the panel that he later put the matter behind him but was contacted by a CBC journalist and told him what happened.

Under examination from Shandro’s lawyer, the doctor said he hadn’t planned the original post or his media interview as a strategy to discredit the minister during fee negotiations.

“I wanted to get attention that this is a conflict of interest, of a sitting minister of health, whose business would benefit in turn for what his actions were,” he said.

After the story emerged, Shandro issued a statement confirming the meeting.

“The attacks on someone I love and the mother of my children upset me deeply. As any husband would do, I responded passionately to defend my wife,” he wrote.

Shandro said in the statement that he had known Zaidi to be a decent and honorable man.

“When I saw that a longtime political acquaintance and neighbor had posted something to social media that was contributing to attacks against my wife I went to speak to him and implore him to cease propagating this false information.”

Shandro resigned as health minister in September 2021. He was briefly labor and immigration minister before he was appointed to the justice portfolio in 2022.

Shandro’s lawyer, Grant Stapon, told the hearing that the conversation between Shandro and Zaidi was a private matter.

“Those communications should be judged on the basis of Minister Shandro’s actions as a non-lawyer, in his personal capacity,” said Stapon.

“He was not practicing law. He was not acting as a politician. He was acting in his personal capacity.”

“I don’t really get intimidated. This was a very intimidating situation.”

Two doctors also complained that Shandro used his position as health minister to obtain their personal cellphone numbers and contacted them outside regular working hours.

Dr. Lauralee Dukeshire said she was practicing medicine in the Red Deer area when she and another doctor attempted to attend an announcement by Shandro and former Premier Jason Kenney at a hospital.

She testified that she yelled at Shandro and Kenney as they were leaving and asked why they wouldn’t stop and talk to the doctors. When Shandro got on an elevator, she said she told him he was “a liar and a cheat.”

Dukeshire said she was surprised days later when she received a voice mail on her phone from Shandro, who said he got her number from Alberta Health Services.

“He said I was welcome to call back to discuss my concerns. My first thought was how does he know who I am and how did he track me down?” she got

“My initial reaction was disbelief and a bit of fear. I felt that the government had tracked me down to say we know who you are and we can find you 36 hours after I had said something insulting to him.”

The hearing runs through Thursday.