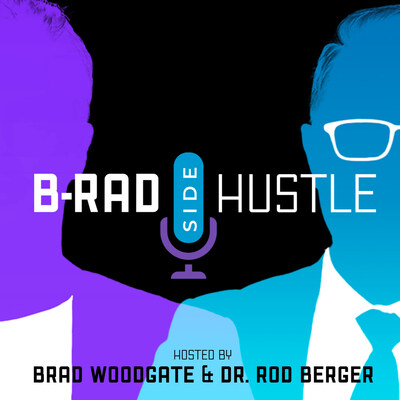 Woodgate and Berger are determined to unpack the misconception that entrepreneurship is for a select few.

TORONTO, Jan. 25, 2023 /PRNewswire/ – Serial entrepreneur, owner of two billion-dollars brands, authors, and recording artists Brad Woodgate has joined forces with podcaster and global media personality Dr. Rod Berger to launch B-Rad Side Hustle Podcast, the first podcast dedicated to underpinning the entrepreneurial stories of celebrities, influencers, athletes and musicians. Woodgate believes, “there is no such thing as just being an athlete, actor/actress or musician you are a walking brand….and with that brand comes a lot of side hustle opportunities. Some fail, some are enormously successful, and that’s what this new podcast will uncover with each guest.” With the disconnect society has had since the Covid-19 pandemic, Woodgate and Berger feel that B-Rad Side Hustle is an opportunity to create an open space to unplug and reconnect with entrepreneurs in a new way.

“There’s an entrepreneur in all of us, and sometimes it just takes the story of a beloved icon to inspire us to take that chance or risk we’ve always wanted to take,” says Woodgate. “What you will see with each guest is a vulnerability like they’ve never shown before, as their side hustle is something they are learning on the spot based on the new opportunities in front of them. Many succeed, but many fail, just like all of us in entrepreneurship. We want to create a community where we can grow and learn from each other.”

The concept is to start a dialogue about the importance of side hustles and the process in which they develop. In 2020, over 45% of Americans started a side hustle, with 15% making over $1,500 a month.

“B-Rad Side Hustle refers to the moment in life in which something happens to change one’s momentum. Moving from a concept to a business can be difficult but achievable with planning, passion, and optimism,” says Berger.

Podcast listeners spend an average of 5 hours listening to audio per day, equaling over 10% of content consumed by millennials. With a combined reach of 250,000 on social media and awareness at 75,000 retail outlets in over 75 countries, hosts Woodgate and Berger are excited to tackle a variety of engaging topics with a very underserved and diverse range of listeners who want to hear uncensored discussions about the trials and tribulations of all things business.

The B-Rad Side Hustle The podcast will be available on all streaming platforms March 2023. To learn more about the podcast or to propose a guest, please email Maria-Teresa at [email protected]

About B-Rad Side Hustle

B-Rad Side Hustle uncovers the radical business stories you haven’t heard; the trials and tribulations, the epic failures and incredible successes — those are the topics Woodgate and Berger dive into with celebrities, athletes and musicians. There is an entrepreneur in all of us, and every week the B-Rad Side Hustle hosts unpack these stories from the most unsuspecting personalities.

Brad Woodgate is a self-made serial entrepreneur, author, reality TV personality and recording artist. Having launched several successful companies over the past 22 years in the health and wellness space, he has managed over 1000 employees, launched over 800 products, and distributed to more than 75 countries. In 2015, based on his own health concerns, Woodgate took a very strong interest in the effects of refined sugar. This led to the establishment of the No Sugar Company in 2018, which has quickly disrupted the global food industry and is now one of the fastest growing food companies in North America. In 2021 he released his first book No Sugar In Me, which gained distribution across Costco locations. In 2022, Brad launched and starred in his own Superbowl commercial for his new beverage company Joyburst. He followed that launch with his debut summer hit Joyburst song ft. Vanilla Ice and a Joyburst energy drink flavor collaboration of the same name. With live performances in Toronto, new York and Niagara Falls with Vanilla Ice, he debuted his first solo single It’s a No For Me three months later, and that same month he was officially signed to the record label Anthem – the first Canadian CEO of a food & beverage company to do so. He has since appeared as an investor in season 8 of Elevator Pitch reality show and has two new songs launching in Q1/23.

Dr. Rod Berger is a communication strategist and on-air personality engaging with global and iconic companies, individual brands, celebrities, professional athletes, and award-winning entertainers. Berger writes for Forbes and Entrepreneur Magazineand has interviewed the likes of Charles Barkley, Sammy Hagar, Deepak Chopra, Guy Fieri, Jermaine Dupri. In 2022 he traveled to sub-Saharan Africa, the Middle East (Jordan), Sweden, Norway, Torontoand from Miami to Los Angelescovering stories – most notably, he visited with the Pope in Rome to discuss the global refugee crisis, and in early 2023 he will be in Kosovo to conduct interviews.