From vacuums to air fryers, auction houses are cashing in on online shopping returns 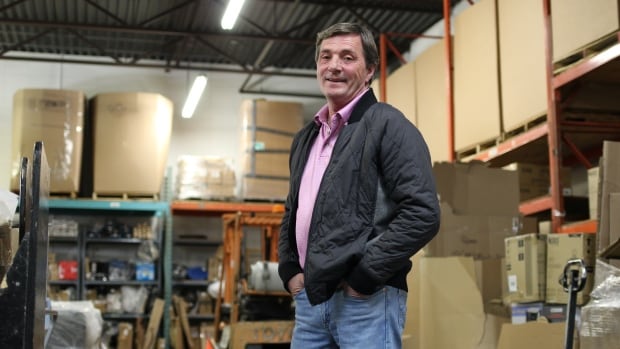 On a bright but chilly Saturday, the parking lot at Ollive’s Auction in Calgary is bustling with a steady stream of customers arriving to pick up the treasures they’d won the week before.

Among them: a $7 vacuum cleaner, an $11 hair dryer brush and two tricycles for $13, sold at a steep discount.

“I don’t want to advertise this place because it’s a gem,” said shopper Pat Knecht, who picked up the vacuum cleaner along with a lamp, some storage bins and a dozen picture frames. “You can get some really good deals.”

Items at Ollive’s Auction can be found at a steep discount because they’ve likely been purchased and returned once already. The business is among a growing number of auction houses whose bread and butter has become selling off returned and excess merchandise.

That line of business has grown as online shopping, and online returning, have become ever more popular — with some research suggesting 30 per cent of what’s bought online ends up being sent back. For retailers, the price of shipping, processing and restocking returns can be steppeand liquidation is one way to deal with it.

As Black Friday kicks off the official start to the holiday shopping season, these auction houses offer a glimpse of where some of those returns wind up.

‘We never know what’s coming in’

Inside the nondescript brick exterior of Ollive’s Auction is a roughly 5,000-square-foot warehouse, packed floor to ceiling with everything from diapers to paddleboards to electric vehicle chargers.

The business gets a truckload every other week with about 24 skids’ worth of product: a mix of online returns and unsold-but-outdated merchandise that’s being cleared out to make way for what’s new.

Owner Wayne Ollive works with a national liquidation company that sources the returns directly from retailers. He chooses how many truckloads to order, but the rest of the process is a roll of the dice, he said.

“We never know what’s coming in,” said Ollive. “It’s kind of like Christmas for the staff when we’re opening up the skids because we don’t know what to expect.”

While it’s hard to pin down exactly what share of returned and excess merchandise ends up at auction, or in liquidation more broadly, retail consultant Sonia Lapinsky said it may be happening more often as retailers deal with a “glut” of inventory from previous supply chain disruptions, and from the growing trend of customers buying excess merchandise and then sending it back.

“I would say over the last few months, there would be a significant percentage, much more than usual, that’s off to the liquidators,” said Lapinsky, managing director in the retail practice of the global consulting firm AlixPartners. She’s based in the US but said similar trends are at play in Canada.

And while liquidation has become a common option for retailers grappling with online returns, Lapinsky said it isn’t necessarily the most profitable.

“The liquidation route is going to be lower level margin, just above actually destroying the merchandise itself.”

Amazon Canada told CBC News in a statement that it resells most returns, sends them back to suppliers and sellers, or decides to donate or recycle them — though “in some instances” it liquidates returns that can’t be resold.

‘Do you want to be in the return business?’

Ollive’s Auction is something of a newcomer to the Calgary retail returns auction scene, which it has been doing for about a year and a half (although Ollive himself has been calling auctions since the 1980s).

Other businesses in Calgary say they, too, are now selling online returns.

A 10-minute drive away is Reid’s Auction Canada, which has been around for more than three decades. Owner Joe Hajas said, in recent years, the focus has largely shifted from selling consignment goods, from restaurant closures and bankruptcies, towards returns, which now make up about 80 per cent of the business.

“It really ramped up just before COVID,” said Hajas, who said he buys one-to-two truckloads a week, much of it coming from Amazon.

“We basically had the liquidator call us saying, ‘We’ve got extra trailers, do you want to buy some and be in the return business?’ And we said, ‘Yes.'”

A more longstanding player in Calgary is Graham Auctions, which was founded in 1992 and markets itself as one of the country’s most established liquidation auctions.

The business also started off in the more traditional realm of vehicle, salvage and consignment auctions, but got into the returns game about 15 years ago with a certain, well-known “large retailer,” said general manager Mike Orechow, who declined to say which one.

The business currently receives between four-to-five truckloads of miscellaneous items — from blankets to rugs to tools — every day, and puts between 4,000 to 5,000 lots up for auction per week, Orechow said.

“We go through a lot of inventory,” said Orechow, whose business also auctions new but unsellable merchandise, such as canceled online orders and items with damaged packaging.

Meanwhile, auctioneers say their customer base has also grown as their sales have moved online and their auctions are no longer limited by the size of their building — or the number of people willing to show up to bid in person.

With the cost of living on the rise, bidding on an auction is a rare opportunity for customers to choose what they want to pay for something, even if there’s some risk associated with buying a pre-owned item.

“Outside of the auction world, well, you can’t walk into your local Gap and negotiate prices or anything,” said Andre Madden, a longtime auction shopper who picked up a fan and a scale at Ollive’s Saturday.

“I think most of the people that are in the auction world are thrifty … you’re looking to save some money, because times are tough and they’re not getting any easier.”

Some also see the business model as a way to keep items out of landfills and mitigate some of the environmental cost of returnsthough Hajas, for one, got the first hand view of just how much stuff ends up sent back has left him with mixed feelings.

“It kind of shows you what people do, how they’ll buy a wedding dress and return it after they use it, or they’ll take a tool and destroy it and return it anyway because they don’t care,” he said .

“We’re just pushing the problem around, we don’t mitigate the problem.”

WATCH | Where your online returns really end up:

Why free online returns are terrible for the environment

Between 30 and 40 per cent of all online purchases are sent back. You may not realize it, but those returns are actually costing the environment, one expert says.

Still, business at all three auctions is strong enough that expansion is underway. Orechow recently opened an in-person liquidation store, Hajas has opened a similar pop-up and Ollive said he hopes to launch a second auction location.

He expects demand will only rise in the weeks ahead.