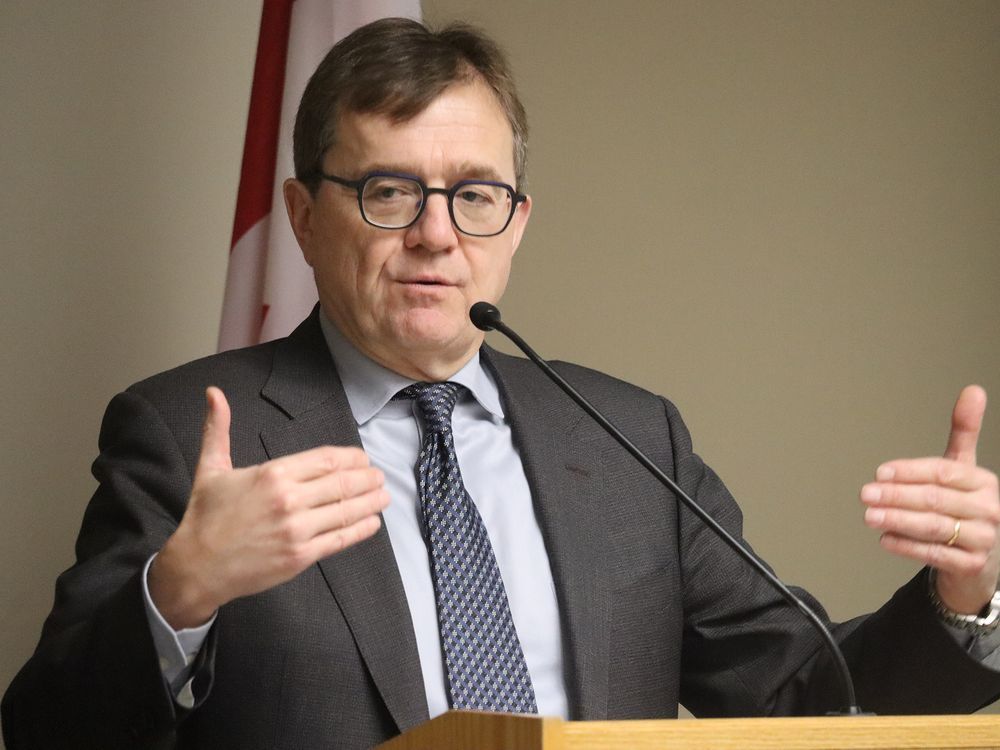 Sarnia has the attention of Canada’s natural resources minister.

Jonathan Wilkinson spent more than two hours touring the Western Sarnia-Lambton Research Park on Jan. 23 and hearing from industry, labor and community leaders about why promised federal Just Transition legislation to support workers and communities shifting from the oil and gas sectors to a greener low-carbon economy shouldn’t forget the Sarnia region.

“I would say the mayor brought it very focused to my attention,” Wilkinson said at the end of his visit that came at the invitation of Sarnia Mayor Mike Bradley after reports the legislation was expected to be introduced some time this year.

“It definitely is something that is on the radar screen federally, and we’re interested in partnering on projects,” Wilkinson said. “There’s a lot of really relevant industry that exists here.

“The conversation around a whole bunch of these issues, very much including hydrogen, is something that we’re very interested in.”

Officials in Sarnia and the rest of Lambton County have been working to establish the area as a “hydrogen hub” in Ontario to attract new investment expected to develop low-carbon versions of the potential fuel.

It has been part of an effort by the community to maintain its oil and natural gas-fed refineries and chemical plants while also expanding into biochemicals and other low-carbon industries.

“We’re quite worried about the transition and what it means for us,” said John Swart, president of the Sarnia-Lambton Building and Construction Trades Council.

Thousands of unionized construction workers make their home in the Sarnia area, and work on construction and maintenance jobs at the refineries and chemical plants in the community. Many others work for companies serving local industry.

“We have good jobs … and the last thing we need is the transition to the unemployment line,” Swart said.

Wilkinson said the phrase “just transition” is one the federal government adopted from its use internationally.

The move to a low-carbon economy will require large construction and renovation projects, and “that’s going to drive huge demand for folks who work in the trades,” he said.

“We need to be expediting opportunities for communities like yours,” Wilkinson said to local representatives gathered at the research park.

He encouraged community representatives to tell the federal government about how it can help.

“I think this community is uniquely placed … in the context of being an early mover on hydrogen,” Wilkinson said.

While more conversations about the transition involve Alberta because of the percentage of its economy made up by oil and gas, “I also think it’s very fair to say this conversation is relevant to all communities, and particularly communities like yours,” he said.

“We want to be part of the conversation going forward to ensure that we can all have a lower carbon footprint but still have well-paying jobs,” Sarnia-Lambton MP Marilyn Gladu said.

There were questions about the Enbridge Line 5 oil and natural gas liquids pipeline Michigan is attempting to shut down where it crosses beneath the water of the Straits of Mackinac. That dispute between the state and the company is currently before a federal court in Michigan. The Canadian government has previously voiced its support for Enbridge.

“It is, for sure, a major priority for us,” Wilkinson said.

Line 5 supplies a significant amount of the oil and natural gas liquids used by local industry.

Wilkinson said he raises the pipeline’s future every time he meets with the US secretary of energy.

“We will continue to push that,” he said. “I’m sure – very sure – the prime minister will raise it with President (Joe) Biden when he is here in March.”