Shana Erblich of Elizabeth, 21, is a rising junior at Rutgers University, majoring in mechanical engineering. For six weeks this summer, she interned in the nanophotonic lab of Professor Dror Fixler, the director of Bar-Ilan University’s Institute of Nanotechnology and Advanced Materials.

Mrs. Erblich worked on a project to develop an innovative method for detecting pollutants in water by collecting light from all possible angles to determine how light scatters through the water. She prepared samples that simulate polluted water at different levels, then tested them in Dr. Fixler’s experimental system.

She also was encouraged to use her mechanical engineering skills to help improve the system. “The master’s student I worked with wanted to redesign some of the apparatus, so we spent some time doing 3D modeling and printing that would allow us to experiment in a cleaner way,” she said.

Eliana Lebowitz sets up a half cell for oxygen reduction reaction to test a platinum/carbon catalyst. (Bar-Ilan University)

“It was great to work in a lab with hands-on materials doing hands-on research in a way that is really impactful, interesting and intellectually challenging, surrounded by people who are invested in me learning.”

Mrs. Erblich also enjoyed the Jewish studies classes, activities, and trips available to the male and female interns, who were housed separately on Yeshiva University’s Jerusalem satellite campus. “At Rutgers I don’t have that many opportunities to learn Torah, and this was a really nice community of people to do that with,” she said.

Professor Arlene Wilson-Gordon of Bar-Ilan’s chemistry department directed this year’s program. She paired the students with Bar-Ilan faculty members based on their academic backgrounds and interests. They were given research assignments that would best enhance their summer experience and promote individual growth and career development.

“This is a tremendous opportunity for students from abroad to participate in research in Bar-Ilan’s state-of-the-art labs and to get to know researchers from all the diverse sectors of Israeli society,” she said.

“Over the years, we’ve benefited from the significant contributions of hundreds of talented students to advancing research in our labs.” 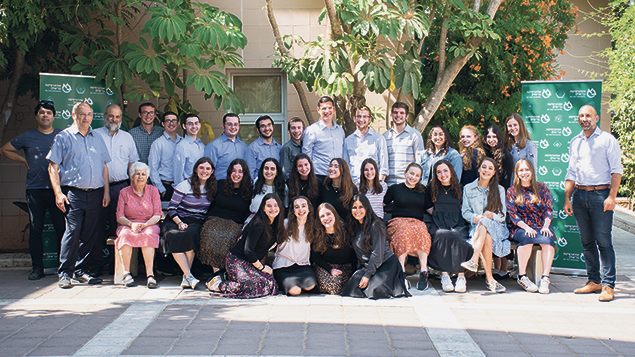 A group photo of the Summer Science Research Internship participants in August 2022. Shana Erblich is in back row, third from right; Shoshana Linfield is in middle row, fifth from left; Eliana Lebowitz is in the middle row, fourth from right; Noam Putterman is in the back row, sixth from right; and program director Prof. Arlene Gordon and far left, middle row. (Moriya Kolender, Bar-Ilan University)

The students were assigned to labs in Bar-Ilan’s Institute for Nanotechnology and Advanced Materials, the Gonda (Goldschmied) Multidisciplinary Brain Research Center, the Alexander Kofkin Faculty of Engineering, the Mina and Everard Goodman Faculty of Life Sciences, and the departments of mathematics, computer science, chemistry, physics, and psychology.

The program included half-day trips to scientific, industrial, medical, agricultural, and other sites around Israel, including Israel Aerospace Industries, the laboratories of the Volcani Center-Agriculture Research Organization, Teperberg Winery, and the Institute for Torah and the Land of Israel.

Mrs. Linfield worked on a research project about intimacy in long-term romantic relationships. By analyzing couples’ own reports, as well as their video-recorded conversations, the researchers tried to identify different predictors associated positively or negatively with desire.

Led by Shira Mond-Beker, a clinical psychology Ph.D. student working with Dr. Rafaeli, Ms. Linfield and two other research assistants – one from the United States and one from Mexico – were responsible for viewing and coding the couples’ recorded conversations. 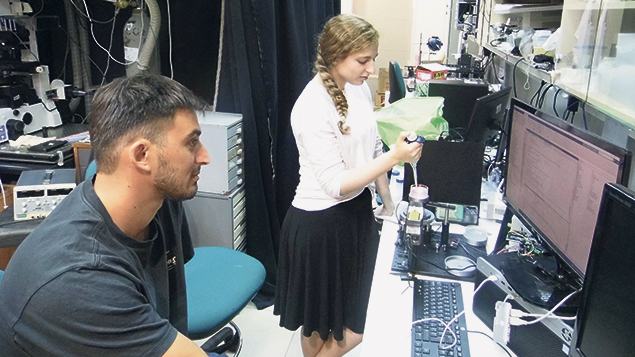 “I think it’s unique to travel thousands of miles away to discover that even though we all come from different countries, we all speak the same common terms in psychology, and that common language is being spoken between us under one roof,” Ms. Linfield said.

The lab members “really value the opinion of research assistants in the lab, and our contributions aren’t negated but incorporated into the studies themselves,” she added.

Mrs. Linfield is considering continuing her graduate studies in clinical psychology in Israel. “This summer is a real opportunity to test the waters, and so far I can see that studying in Israel is a definite possibility and something that I can pursue,” she said.

Eliana Lebowitz, a 21-year-old rising Stern College senior from Bergenfield, was assigned to the renewable energy lab of Professor Lior Elbaz. She said that she has long been interested in meteorology and the environment, so this lab was a perfect fit.

She was involved in research on fuel cell technologies. Fuel cells convert the chemical energy in hydrogen directly into electricity and pure water. They are essential to the production of “green” hydrogen from sustainable energy sources such as wind and sun, but now require expensive materials such as platinum. Dr. Elbaz’s team is searching for alternative catalysts that might be cheaper and more efficient. 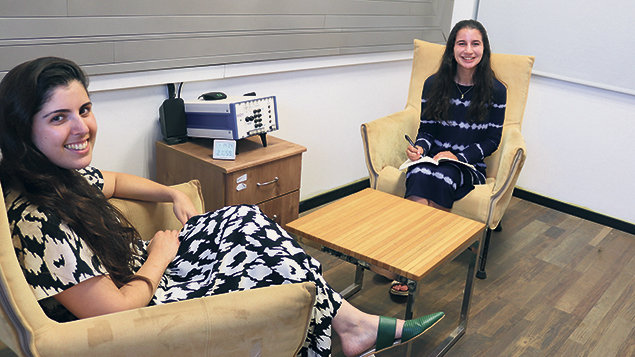 Mrs. Lebowitz and master’s student Michal Mizrahi — a former student in the same Bar-Ilan/YU summer program who since made aliyah — tested materials called aerogels as a possible alternative to platinum.

Mrs. Lebowitz, a chemistry major, is considering studying for her master’s degree in Israel since she’s eager to make aliyah. “This experience has been eye-opening for me to see what it’s like to live here,” she said. “And I’m really grateful that I’ve been able to work in a lab with such sophisticated and advanced equipment and people that I’ve learned so much from.

“I had to immerse myself in a field that I wasn’t familiar with,” Mr. Putterman said. “I’ve read articles by leading researchers, and it’s been very rewarding that I can actually understand them.”

Mr. Putterman said he was warmly welcomed by members of the Okun lab and felt that the research they did will have “important implications down the line.”

Students in the Summer Science Research Internship Program provide their own transportation to and from Israel; the remaining costs are subsidized by funding from the late Dr. Mordecai Katz and Dr. Monique Katz, the Irving I. Stone Foundation, Joan Seidel, Zoltan Erenyi Fund, and Yeshiva University.