Hobbies offer us an escape from the routines of our everyday lives, can serve as a creative outlet and a way to relieve stress.

And sometimes, hobbies can become profitable and offer a new perspective on life – something Kyle Jay knows first-hand.

Gone are the days of aerial photography having to be undertaken with an airplane – Jay’s hobby, instead, involves using a drone to take photos and videos of Prince Edward Island’s picturesque landscape. 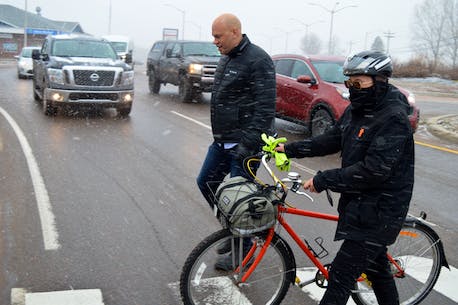 The Fanningbrook, PEI native says it’s a pretty straightforward process if your drone is in the sub-250 gram category.

“It was my starter drone I had when I stumbled my way into the industry,” he says of his DJI Mavic Mini.

“There is no license or registration required, more or less just use common sense, and to be mindful you share the sky with aircraft so always give them the right of way.”

For him, though, flying a drone is about much more than getting unique angles on pictures.

Fourteen years ago, Jay had a brainstem stroke.

“I’m confined to a wheelchair and have speaking issues. Using a drone is my escape from reality, so to speak,” he explains.

“During a stay at the Stan Cassidy Center for Rehabilitation where I work on walking etc., I was approached by my roommate, an Indigenous man. He wanted to show me his drone.”

For Jay, that simple encounter changed his world.

“My face lit up and I texted my mother saying I wanted one. No one expected this,” he says.

Since that time, Jay has turned his hobby into a business, Island Aerial Photography.

Jay flies and operates the drone on his own.

“My caregiver, parents or friends will drive me around and play my spotter for the day. I have them all trained, they love it more than me! We’ve seen the Island pretty well tip to tip,” he adds.

When asked what his favorite place was on PEI to document, Jay replied, “That is a hard one, PEI has so much beauty above the trees.”

“This year I’d have to say the VANCO Farms Ltd. tulip fields,” in Dromore, PEI.

How to get started

“People don’t own the sky; however, not everyone likes drones flying around and not knowing why. Most times with a simple explanation people are OK with it,” he says.

Using a drone above the sub-250 gram category, such as the DJI Mavic Air 2 that he currently uses, requires licensing and registration, which is required right away.

Insurance is not required, but it is a good thing to have.

“Upon seeing the quality produced (with the DJI Mavic Air 2), I knew I needed it,” he says.

Jay says the basic certification license required for larger drones “basically lets you fly 95 per cent of Prince Edward Island, but requires you to stay out of airways such as Charlottetown.”

A metropolitan center, Charlottetown has a red circle around it where you basically cannot enter as it requires an advanced license. It took Jay about a year of studying before he was ready to write that exam as well.

This means he can apply for permission to access the proper channels to fly his drone in the Charlottetown area using the Nav Drone App. This app facilitates coordination with the Charlottetown Airport and notifies incoming air traffic that a drone is in the area.

“Before, I just had basic certification access using the app so I never needed to notify as I had my own procedures and emergency checklist and numbers to call,” he says.

But his drone is never within direct range of runways and approaches.

Jay says the app confirms what processes are needed during the operation. In some situations, the airport must be contacted prior to takeoff and at the conclusion of the flight. He and the Charlottetown Airport can communicate via his spotter on the ground using a cellphone.

“So, all in all, it is a very enjoyable hobby that comes with great responsibilities,” he says.