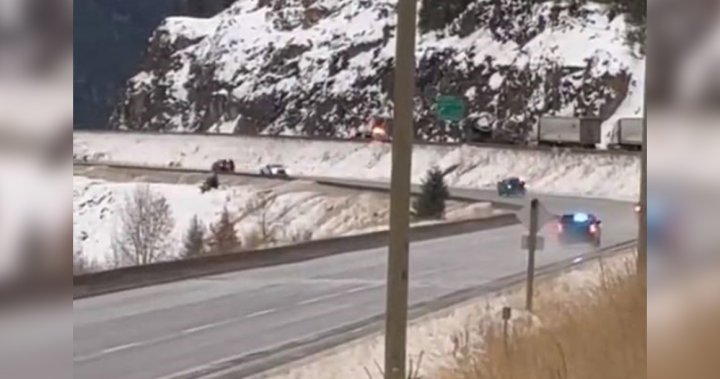 Half of the Coquihalla Highway was closed in both directions because of an “active and unfolding police incident” on Wednesday afternoon.

The highway was closed between just north of Hope, BC, to just south of Merritt, for hours, finally reopening to traffic just before 7 pm

In an update late Wednesday evening, the police declined to explain what prompted the closure of the critical route.

A “more fulsome” update will be provided tomorrow, Sgt. Chris Manseau said in a media release.

“The investigation into the need for the closure remains active and ongoing, and the public can anticipate seeing a marked increase in police vehicles in the area,” he said.

Police did not say if anyone had been arrested or injured.

Mounties are asking anyone who was near the Juliet Bridge just south of Merritt and near the Coquihalla Summit between noon and 2 pm with dash cam video to contact Merritt RCMP.

1:20
Coquihalla Highway closed between Hope and Merritt due to police incident

Three suspects charged after kidnapping in Merritt, BC, police say

Earlier in the day, the RCMP said a large number of policing resources from surrounding areas had been deployed to the Juliet Bridge area.

Police had also asked the public to avoid that area, and refrain from posting any police actions online.”

DriveBC had recommended detours via Highways 3 and 5A.