TIKTOKERS and social media stars are known for striving to keep up with the latest fashion trends.

An influencer, known only as Czech1two3, revealed that she bought a skimpy-looking orange bikini.

But, she was left bemused at how the swimwear looked when she showed it off to her fans.

The top half of the bikini left the TikToker’s cleavage exposed and she was not happy with how the pants looked.

In a viral TikTok video, the bikini-clad woman was seen tugging at the skin on her hips.

The caption on the screen appeared: “Busted can of biscuits when you order IG swimwear.”

The influencer seemed conscious of how the two-piece bikini looked on her, but viewers had a different opinion.

One said: “Damn you are absolutely beautiful.”

Another heaped praise is the influencer, saying: “Looks perfect to me.”

The praise seemed to leave her in stitches as she responded in the comments section with several laughing emojis.

The woman has been seen sporting different-style bikinis in a series of videos that she shared on TikTok.

In one clip, she was seen wearing black swimwear while on a boat cruising on the Lake of the Ozarks.

And in another, she was wearing an all-white outfit at a pool party.

Meanwhile, the US Sun reported how Skims shopper Sarita was left shocked at the size of the fashion retailer’s micro bikini.

In a viral clip, she used tortilla chips to document how small the swimwear was.

Sarita bought the Fits Everybody micro triangle bralette and the matching $14 thong from Skims.

She said: “So if you’ve been eyeing the Skims micro bikini and wondering about the size, these are tortilla chips for scale.”

She placed the Trader Joe’s chips on each cup of the bikini as well as on the bottoms.

Sarita revealed that she wouldn’t wear the skimpy swimwear when going to the beach, but said she would utilize the top at a “private pool.”

She added: “These bottoms I would wear in my backyard for cute tan lines. I would never wear this in public.”

Influencers have revealed that they are still going to wear skimpy swimwear despite what their critics may say.

Trolls said fitness guru Emily Skye should cover up, with some even going as far as to label her “manly.”

She refused to be put down by the criticism and indirectly responded to the trolls online.

In an Instagram story, she said: “My body is currently not in fashion!

“Yep, you read right! Body shapes are in fashion. How ridiculous is that! 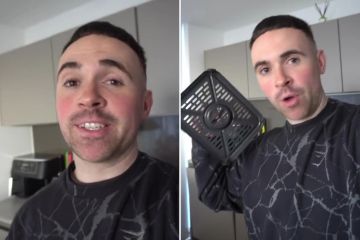 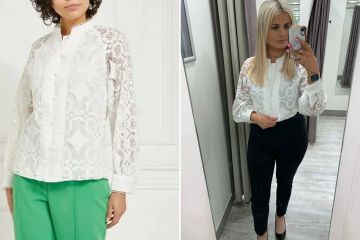 “I don’t have a tiny waist with big hips, bum and legs so I’m not in fashion. Lucky fashion has never been my forte.”

Fashion influencer Hanya Kizemchuk continues to don bikinis at the age of 60 despite what her haters say.