It started as a hobby: A cooking class for foreigners 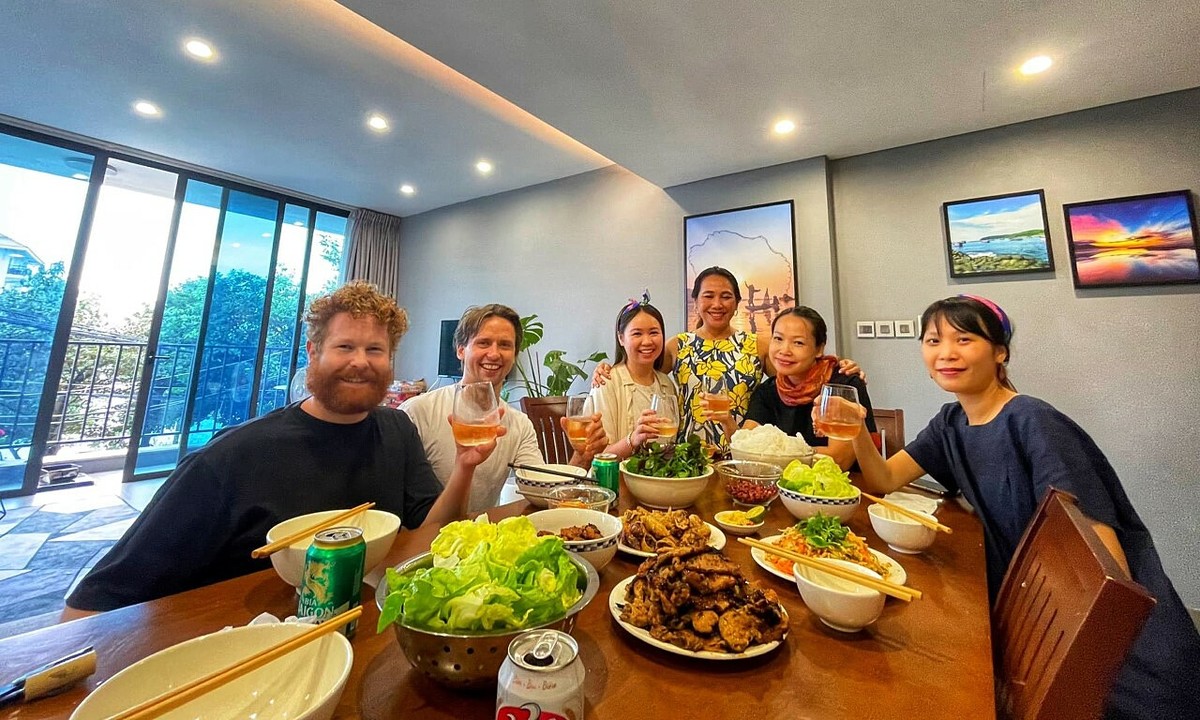 Thanh and her team of five people call themselves “Hanoi and around with Thanh.”

For eight years they’ve been gifting the secrets of Vietnamese cuisine to foreigners via fun and casual classes.

Thanh said she wants her attendees to enjoy themselves to the fullest, so she limits enrollment in each class to two-four people for quality control. Her team holds about five courses per month.

It all started with a hobby when Thanh was in university.

She used her free time to guide foreign tourists around the town so she could improve her English.

But over time, she grew passionate about sharing Vietnamese culture with outsiders.

“I have a dream of becoming a tourism ambassador for Vietnam, someone who can share meaningful experiences that are directly connected to local culture with visitors,” said Thanh. “Moreover, I want to contribute to the development of sustainable tourism.”

Hanoi and Around with Thanh participants accompany Thanh as she shops for ingredients at Vietnamese wet markets.

She even teaches them how to bargain, just like a local would do.

The team then presents a menu featuring four distinct cuisines to participants in a four-and-a-half-hour class.

Thanh’s cooking classes take place in a Hanoi family kitchen. They’re taught by the family’s mother and her niece.

“I got to know the mother because she had previously assisted me in my Vietnamese paper mask workshop. Knowing that she can cook well, I invited her to become a cooking instructor,” said Thanh.

For the tourists and expats that take part in these courses, it’s difficult enough to learn new recipes using unfamiliar ingredients. But they also have to prepare the meals in a traditional Vietnamese home.

The kitchen is small and cramped compared to Western kitchens, which makes it challenging. When confronted with unfamiliar flavors like fish sauce, class members tend to hesitate, but they soon grow to love the fish sauce-based garlic and chili sauce.

Bob Chee, a participant in one of Thanh’s first cooking classes, said: “I didn’t know what to expect when I entered the host’s home. It was one of the few times I entered a home in Hanoi, so I was naturally curious .”

“I’ve never been able to eat such a tasty soup at a Vietnamese restaurant. I really enjoyed the meal,” he said.

Many people, according to Thanh, have come back for another session in order to learn how to prepare different foods. And they’ve recommended her classes to their friends and family.

These tourists learn not only the recipes for a variety of Vietnamese dishes, but also the cultural meanings behind some of them. For instance, they learn that foods like fried spring rolls, which symbolize prosperity and success, are typically prepared for special occasions like the Lunar New Year holidays and ancestor worship.

Jeane Cottenceau, who took a cooking class with her relatives and friends, said: “We all love cooking, and food is a key point of the Vietnamese experience… It is also a nice opportunity to spend quality time together.”

Preparing traditional Vietnamese cuisine under the guidance of a local host in a Vietnamese kitchen gave Jeane the opportunity to learn more about local culture, she added.

At the moment, Thanh has about 20 students each month, the majority of whom are expats living in Hanoi. Many people sign up for the class because they’ve become interested in Vietnamese food after taking a food tour around town, or because they enjoy specific dishes like pho give bun cha.

Vietnamese food has become more well-known in recent years thanks to international food publications and celebrity chefs. At the 2022 World Culinary Awards, Vietnam was recently named “Asia’s best culinary destination” by industry experts and globetrotters for the very first time.

Gordon Ramsay, a well-known British celebrity chef and television personality, recently identified Vietnam as one of the best culinary travel destinations, praising the country as an “extraordinary melting pot of great food.”

Tags:It started as a hobby: A cooking class for foreigners - VnExpress International