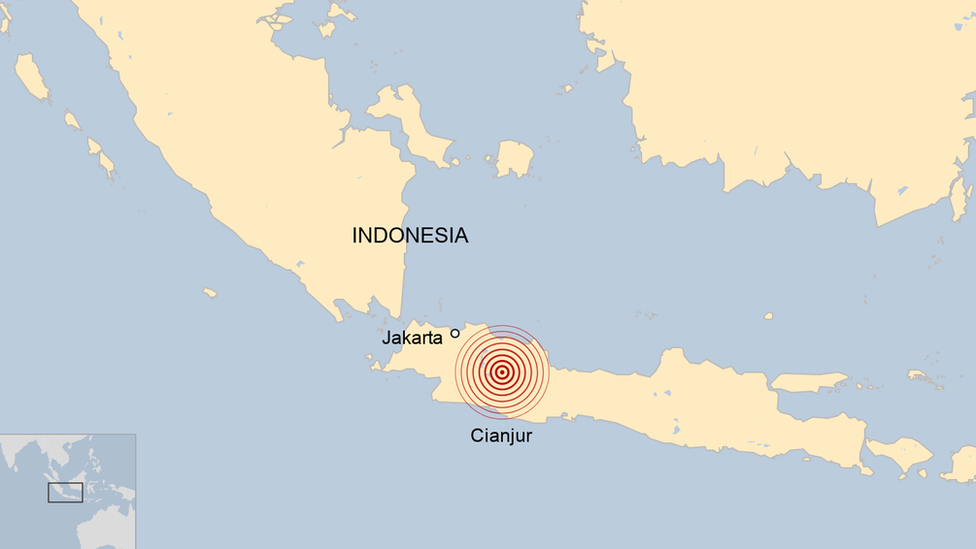 The 5.6 magnitude earthquake struck Cianjur town in West Java, at a shallow depth of 10km (6 miles), according to US Geological Survey data.

The tremor could be felt in the capital Jakarta about 100km away, where people in tall buildings were evacuated.

Officials have warned the death toll could rise and of possible aftershocks.

Videos on social media show the damage to people’s houses and shops.

At least 300 people were being treated for injuries at one hospital in Cianjur, Herman Suherman, a government official there, told news channel MetroTV.

Most of the injuries were bone fractures sustained from being trapped by debris in buildings.

Rescuers have been trying to evacuate people from collapsed buildings, and managed to save a woman and her baby, according to local reports.

In Jakarta, office workers rushed out of buildings in the civic and business district during the tremor, which lasted for about a minute.

“I was working when the floor under me was shaking. I could feel the tremor clearly. I tried to do nothing to process what it was, but it became even stronger and lasted for some time,” lawyer Mayadita Waluyo told the AFP news agency .

An office worker named Ahmad Ridwan told Reuters: “We are used to this [earthquakes] in Jakarta, but people were so nervous just now, so we also panicked.”

Earthquakes are common in Indonesia which sits on the “ring of fire” area of ​​tectonic activity in the Pacific.

Have you been affected by what happened? If it’s safe to do so, please email: [email protected].

Please include a contact number if you are willing to speak to a BBC journalist. You can also get in touch in the following ways:

If you are reading this page and can’t see the form you will need to visit the mobile version of the BBC website to submit your question or comment or you can email us at [email protected] Please include your name, age and location with any submission.