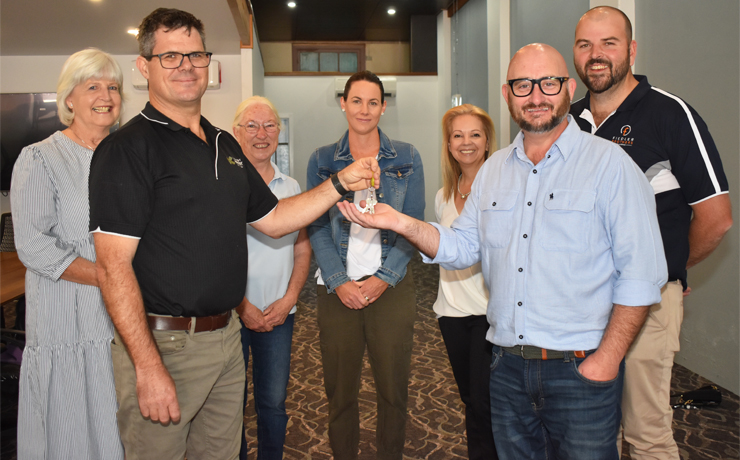 The Kingaroy Chamber of Commerce and Industry (KCCI) has been overwhelmed with the support it has received from local businesses and the South Burnett Regional Council for its “Hub” project.

KCCI president Damien Martoo was formally presented with the keys to the refurbished building at 195 Kingaroy Street on Friday morning.

The KCCI Hub will provide a CBD address for small start-up businesses looking for an office, as well as conference room facilities for use in training seminars.

The former Trendsetter building was bought by Council in late 2020.

The SBRC has long-term plans to turn it into a walkway to link Kingaroy Street (and the car park behind the banks) to the Glendon Street entertainment precinct.

But in the meantime it has leased the building to the KCCI for use as a small business incubator and as an office for the association until at least August 2025.

Council paid for the removal of asbestos as well as contributing towards the cost of installing a new ceiling, insulation and a disability access toilet.

Stanwell Corporation also provided a grant of just over $38,000 towards the project.

KCCI members jumped on board as well, with cash donations and the supply of goods and services at either cost or as in-kind support.

The refurbishment of the building has included the construction of a kitchenette, the installation of air-conditioning and a new floor, reglazing, painting and structural work including new beams, floor joists and electrical wiring.

Although the major building work has now been completed, Mr Martoo said there was still signwriting to be done as well as some IT infrastructure.

The KCCI is also considering installing solar panels to make the space “green”.

KCCI Executive Member Darrin Kefford (Kingaroy Joinery) said he would especially like to thank building certifier Tony Jaques and Leanne Petersen, from the South Burnett Regional Council, for their help with the project.

Business people will be able to enjoy a preview of the KCCI Hub at the Association’s AGM and meet’n’greet to be held on site from 5:30pm on November 30.

Mr Martoo said the “official” opening of the KCCI Hub would be held early next year.