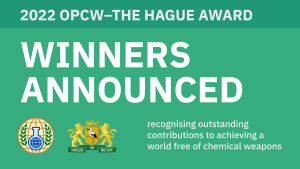 Emergency preparedness for chemical incidents and engaging with civil society related to chemical safety and security are key to the implementation of the Chemical Weapons Convention (CWC). The Director-General of the Organization for the Prohibition of Chemical Weapons (OPCW), Ambassador Fernando Arias, and the Mayor of the Municipality of The Hague, Mr Jan van Zanen, announced the decision of the OPCW-The Hague Award Committee to honor the following three organizations working in these fields as joint recipients of the OPCW-The Hague Award 2022:

In 2013, the OPCW was awarded the Nobel Peace Prize in recognition of its extensive efforts to eliminate chemical weapons. To preserve the legacy of this achievement, the OPCW established the OPCW-The Hague Award in collaboration with the Municipality of The Hague in 2014. The Award recognizes individuals and organizations that play a significant role in advancing the goals of the Chemical Weapons Convention. The total €90,000 cash prize is awarded to up to three recipients.

The OPCW-The Hague Award ceremony will take place on Monday, 28 November, 12:15-13:00 CET, on the sidelines of the Twenty-Seventh Session of the Conference of the States Parties to the Chemical Weapons Convention (CSP-27 ). Both the Conference and the award ceremony are livestreamed here.

This year, marking the 25th Anniversary of the entry into force of the Chemical Weapons Convention, a record number of nominations were received from a wide range of geographical regions and professional areas.

“For the first time, the recipients of the Award include organizations from the regions of Latin America and Eastern Europe,” said the OPCW Director-General. “This also shows that ensuring chemical safety and security is a common goal and global efforts to achieve it are being made everywhere in the world.”

“The announcement of the 2022 OPCW-The Hague Award recipients is taking place in the 25th anniversary year of the Chemical Weapons Convention’s entry into force,” said Mr Jan van Zanen, the Mayor of the Municipality of The Hague.

“The OPCW’s mission to rid the world of chemical weapons is as relevant now as it was then. The Hague congratulates this year’s winners for their dedication to making our world a safer place. Future generations will be grateful,” he added.

“The OPCW-The Hague Awards reflects the importance that the OPCW attaches to the role of various stakeholders in achieving the objectives of the Convention,” said Ambassador Ziad MD Al Atiyah, Chairperson of the OPCW Executive Council and Permanent Representative of the Kingdom of Saudi Arabia to the OPCW. “It recognizes the efforts of organizations and individuals who contribute to the peaceful uses of chemistry.”

/Public Release. This material from the originating organization/author(s) may be of a point-in-time nature, edited for clarity, style and length. The views and opinions expressed are those of the author(s). View in full here.