A new, independent report concluded that the Sandia Science & Technology Park continues to be a major contributor to Albuquerque’s regional economy. Since it was established in 1998, companies and organizations in the research park have paid nearly $7.2 billion in wages and generated more than $4 billion in taxable personal consumption, which refers to consumer spending on goods and services that are taxable in New Mexico. 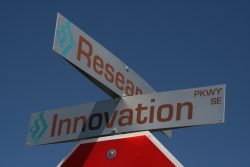 The Sandia Science & Technology Park, associated with Sandia National Laboratories and located adjacent to Kirtland Air Force Base, continues to be a major contributor to Albuquerque’s regional economy, according to a new, independent report. (Photo by Linda von Boetticher) Click on the thumbnail for a high-resolution image.

“Sandia is proud of the park’s continued economic impact on Albuquerque and the surrounding area,” said Laboratories Director James Peery. “It creates jobs, attracts talented professionals to our state and builds partnerships between the Labs and the private sector that bring trailblazing technologies to the marketplace.”

As requested by the City of Albuquerque, the Mid-Region Council of Governments provides an economic assessment of the park every two years. The latest report includes a historical overview of the park and its estimated economic impact in 2020 and 2021. Cumulative impacts since the park was established were also estimated.

The tech park is a master-planned, 340-acre technology community associated with Sandia National Laboratories. It is located adjacent to Kirtland Air Force Base. At the end of 2021, the park was home to 40 companies and organizations.

“In addition to economic impact, the park highlights some of the best tech transfer and supply chain strengths of Sandia,” said Mary Monson, Sandia’s senior manager of Technology Partnerships and Business Development. “Some park companies are suppliers of goods and services to the Labs, and this is facilitated by the park being within walking distance or just a short drive away. Also, companies in the park can receive assistance from the Labs to help solve complex problems. We have partnered with some of the companies through programs like the New Mexico Small Business Assistance Program.”

“Having the technology park in Albuquerque has been instrumental to the success of flagship employers and their employees,” said Albuquerque Mayor Tim Keller. “For nearly 25 years, the Sandia Science & Technology Park has supported our incredibly talented workforce and spurred opportunity, innovation and continued growth in the city’s cutting-edge technology and research industries.”

At the end of 2021, 1,786 employees worked in the park, down from 2,369 when the last park assessment was completed two years ago. The latest report offers some reasons for the drop, including the COVID-19 pandemic, which forced some workers to move out of buildings to telecommute, and the departure of Raytheon in 2021. The report predicts that several hundred workers will return in 2022 and 2023 .

According to the report, for every job located in the park in 2020 and 2021, nearly two indirect jobs were created in the region. The park was also responsible for an increase of $553 million in gross regional product in 2020 and $514 million in gross regional product in 2021. This is the total value of consumption, investment and government spending in the region. 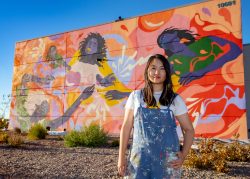 Acclaimed artist Amanda Phingbodhipakkiya, with help from students at nearby Technology Leadership High School, painted a large mural in the heart of the Sandia Science & Technology Park. A second art installation is in early development. (Photo by Rebecca Gustaf) Click on the thumbnail for a high-resolution image.

The science park also helped increase population in both 2020 and 2021 in Bernalillo, Sandoval, Torrance, Valencia and southern Santa Fe counties, according to the report. This was primarily due to new workers and their families being drawn to the area for employment, which brings new spending to the area. Most of the population growth spurred by the park occurred in Albuquerque.

“While the park was impacted by the pandemic, it is still bringing people to the area and creating indirect jobs,” said Executive Director Dewey Cave of the Mid-Region Council of Governments. “The park companies helped fortify our communities during difficult times that have impacted everyone.”

In addition to private sector companies, the tech park is home to a credit union, schools, a museum, an early childhood center, parks, exercise stations, and walking and biking trails.

The Sandia Science & Technology Park Program Office, managed by Sandia Labs staff, is also working with the City of Albuquerque to bring art installations to the area. In 2021, a large mural painted by renowned artist Amanda Phingbodhipakkiya brightened Research Road. Students from Technology Leadership High School, located in the park, helped with the project. A second art installation is in early development and will be coordinated between the park’s program office and the City of Albuquerque’s Public Art Urban Enhancement Division.

“The park continues to become more vibrant with the addition of new artwork and businesses moving in,” said Sherman McCorkle, chairman of the board of the Sandia Science & Technology Park Development Corp. “Change is normal and necessary as we continue growing such a wonderful area.”

More than $22.4 million in 2020-21 public and private investments paid for outfitting of existing buildings and ongoing operational needs.

The report also stated that the park produced $166.1 million in tax revenue for the state of New Mexico and $36.6 million for the city since 1998.

New projects, developments on the horizon

Additional park expansions are in the works:

The Sandia Science & Technology Park is a partnership of Albuquerque Public Schools, Bernalillo County, the City of Albuquerque, the Mid-Region Council of Governments, the New Mexico congressional delegation, the New Mexico State Land Office, PNM, Sandia National Laboratories, the Sandia Science & Technology Park Development Corp., the State of New Mexico, the US Department of Energy, the National Nuclear Security Administration and the US Economic Development Administration.

/Public Release. This material from the originating organization/author(s) may be of a point-in-time nature, edited for clarity, style and length. The views and opinions expressed are those of the author(s). View in full here.