Society told me to love my big breasts. I never did 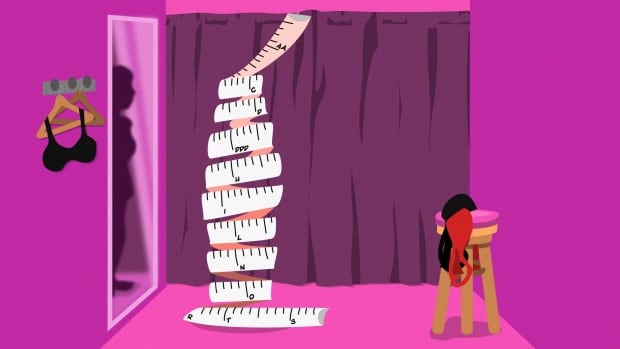 This First Person piece is written by Olivia Malley, who lives in Halifax. For more information about CBC’s First Person stories, please see the FAQ.

I got my first DD bra when I was 13. My mom and I were at the La Senza in our local mall. The store walls were covered with pictures of beautiful women twice my age. I felt like a girl playing with her mother’s makeup.

I was ushered into a pink changing room, and a store employee came in and measured my breasts. She left to get bras for me to try on, and standing alone, I felt like I was waiting for a deadly diagnosis.

And in a sense, she delivered one. The employee told my mom she might want to sit down for what she was going to tell her. My mom gave her a puzzled look and complied.

“Your daughter is a double D,” the store employee said slowly. My mom gave her a blank stare and replied, “I know, I can see her.”

The results were in, and I felt like I had done something wrong. That was the first day I was ashamed of my breasts.

A gift that was wasted is me

My breasts have always felt like a gift wasted on someone who couldn’t see their value. TV, movies, songs — all these things have told me that as a woman, I should want large breasts and yet this idea has always felt suffocating. I’ve never understood how this small part of who I am can be such a big deal.

I’ve never wanted big breasts. When I was young, this feeling was challenged by a whole other monster — that I should, without question, love myself just the way I was. And at that time, I desperately wanted to believe in that message.

In high school, many of my friends struggled with self-image, and I felt like hating my “desirable” large breasts didn’t compare. I put on a brave face and felt hypocritical for wishing my body was different.

I was torn between embracing and hating my breasts, and I went through phases of trying to accept them. I wore clothes that didn’t hide them and some that even accentuated them. One day, I was with a friend and her boyfriend, when he suddenly said, “your tits look great in that dress.”

I was mortified. I felt on display, and I felt dirty. It took me three years to wear that dress again.

I was 23 when I went to replace some worn-out bras. As usual, the sales person measured me, but this time, she said my size was 36H. The fact that my breasts had grown against my wishes somehow felt like a personal failure. That was the day I decided to talk with my family doctor about a breast reduction.

Months later, the surgeon told me that I did indeed have large breasts, although he had seen many that were larger. He said I was a good candidate for surgery, and he would be able to take off around 2.5 pounds.

I was relieved, I was excited – but I was also surprisingly offended when I was told how I stacked up to his other patients in size. Having large beasts had been part of my identity for so long that I felt the urge to defend my seat at the big breast table. How could I belong anywhere else when my breasts had caused me so much pain.

My ingrained understanding that my breasts were large made me realize I was anxious as to who I would be without them. Would men no longer find me attractive? It wasn’t like I was constantly beating back men because of my chest, but would I have enough to offer in the looks department without large breasts? How would men react to the scars from the surgery? Several friends had expressed their insecurities about having smaller chests. Would I become like them and trade in one thing I didn’t like about myself for another?

Society is increasingly moving away from strict boxes of what a woman, man or person has to look like. The body types that populate our screens are slowly becoming more diverse. But it was hard to shake the notion that I would be less desirable with smaller breasts.

Ultimately, all these fears and doubts did little to change my mind about surgery. All I had to do was look in the mirror. I had looked into so many in disgust as shirts and dresses made my breasts look like sausages trying to escape their casing. I was just tired.

I wasn’t getting this surgery because I didn’t love myself. I was getting it because I did, and knew I deserved to be happier.

It has now been over three months since my surgery, and it is amazing to have something to be grateful for every single day.

The surgery itself was uneventful. I mostly remember the hours after surgery, resting with my mom by my side and feeling utterly at peace. Looking down at my chest for the first time as I stood up, I was immediately overcome with happiness. I looked how I knew I was always supposed to.

Since surgery, I’ve walked into retail stores and easily found bras in my new size. My friend and I cried as I tried on and bought the bras I’d always wanted.

I no longer fear the dressing room, and more than ever, I love how my clothes make me feel.

I now feel authentically myself.

Do you have a similar experience to this First Person column? We want to hear from you. Write to us at [email protected]