The King’s cousin David Linley on his new career | Times2

There aren’t many people who’ll admit that crafts can reduce them to tears. The Earl of Snowdon is one of them. At one event, he recalls, musicians including Jeff Beck, Mike Rutherford and the Clash were invited to meet and interact with “incredible luthiers, who make violins and guitars and cellos”. It was “just magical”, he says. “It really did bring a tear to the eye. . .”

Since David Linley, King Charles III’s cousin, became the first royal to follow a vocation — producing handmade furniture — and set up an eponymous business, he has been one of Britain’s most vocal champions of crafts. Which is why he wrote a book, Craft Britain: Why Making Mattersco-authored by Helen Chislett, to bring attention to extraordinary craftsmen around the country.

The glossy tome, with an erudite introduction by the design writer Stephen Bayley, is not only a directory of all the key craft organizations from Cornwall to the Hebrides but a compendium of some of our nation’s most remarkable makers. It takes in embroiderers based in Hampton Court Palace and chair craftsmen from Orkney, leather sculptors and cobblers, marquetry specialists and even a whip-maker.

Sadly, Chislett says, some crafts were left out of the book because the skills have died out. For instance, England no longer has a cricket ball manufacturer even though the game was invented here, “and we probably won’t make bats for much longer”. Hand-stitched kilt-making is on the Heritage Crafts Association Red List of Endangered Crafts, as is neon sign-making; even bell-making is on its way out, with churchgoing declining.

On the other hand, there are crafts that are growing. Ceramic-makers, for instance, have sprung up in the southwest of the country. In Newcastle metalworkers whose families previously might have made ships are constructing metal furniture. Chislett adds that craft fairs are becoming increasingly popular, particularly with the younger generation. “They’re a lot more into sustainability. . . and you are less likely to throw something away if you know who made it.”

There’s a growing appreciation of bespoke objects at the very high end of the market, Linley says. At his furniture company (from which he resigned in November) clients loved coming in to commission bespoke pieces with little quirks: a secret drawer with a martini shaker in it, or an inkwell filled with a specific color of ink. “You can fantasize about what you like and get someone to bring it to life,” he says.

His own London home — “a little flat, which I am very lucky to have” — is filled with handcrafted items that have meaning: a pair of candlesticks that belonged to his theater-designer uncle Oliver Messel; cushions embroidered by British seamstresses; tables turned by fellow carpenters; a pair of bespoke British shoes made “in precisely the color and style and shape I like”. Each of them feels special, because “there is something rather lovely about a piece that comes from the hand of a human”, he says. “It resonates with the human spirit.” 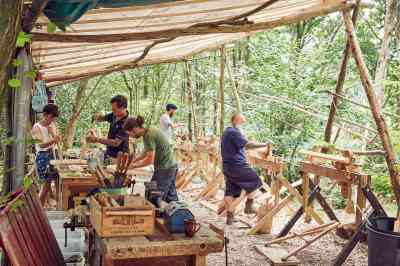 A chair-making workshop run by the traditional craftsman Jason Mosseri

The next part of Linley’s professional journey, he says, will be nurturing others who want to work with their hands. At Street Farm at Highgrove, the Gloucestershire home of the King, an old barn has been converted into the Snowdon School of Furniture, where Linley is going to help mentor the next generation of furniture-makers. “I am 61 now,” he says, “and it’s time to step back and allow the young people at Linley to do things how they want. I have worked all my life creating a brand. And I can now do things for the Prince’s Foundation that are enjoyable and freeing.”

Having made furniture for almost 40 years, Linley says he’s relishing the fact that crafts are becoming more mainstream. “Today you’ll hear Tracey Emin talk about craft, and even sportsmen. This morning on Radio 4 a commentator was talking about a footballer as a craftsman and comparing him to Picasso. That might have been a comparison too far — but there is now far more recognition of the skills needed to do something well. And that can only be a good thing.”
Craft Britain: Why Making Matters by Helen Chislett and David Linley is published by Welbeck Publishing Group