Atlantic Canada is in for a wet and windy ride to start out December as an intense low pressure system is bringing soaking rains, blustery winds, and even snowfall for some, through Thursday.

Winds could reach or even exceed 100 km/h in many areas, with some coastal stations in Nova Scotia already reporting gusts of 90+ km/h by early Thursday.

Well, hurricane season is officially over but it’s 11°C and this is my view in Nova Scotia this morning. pic.twitter.com/T0l0aVZtnZ

— Nathan Coleman (@NateTWN) Nathan Coleman on Twitter: “Well, hurricane season is officially over but it’s 11°C and this is my view in Nova Scotia this morning. pic.twitter.com/T0l0aVZtnZ / Twitter”

This left more than 80,000 customers without power through the morning, with as many as 9,000 in the dark across Prince Edward Island as well. At 5 am on Thursday, Charlottetown Airport was reporting gusts of 75 km/h.

Confederation Bridge was closed to all traffic just before 5 am, with sustained wind speeds of 120+ km/h reported on the Northumberland Strait. The bridge did re-open but with restrictions, as winds were still gusting over 100 km/h at 6 am

Even though the center of the low is more than 1,000 kilometers away, scraping by Hudson Bay through Thursday morning, a conveyor belt of damaging winds is sweeping ahead of the unraveling cold front.

While winds of this magnitude can cause damage to buildings and localized power outages, they’re also ushering in well-above-normal temperatures into the double digits Thursday.

Winds will dissipate across the Maritimes while the frontal system crosses Newfoundland Thursday evening.

WATCH: Transformer explodes as 100+ km/h gusts leave thousands in the dark in NS

Heavy rainfall is also spreading across the area, bringing more than 30-50 mm to the hardest hit regions.

Although these totals aren’t abnormally excessive for the region, they may be enough to lead to ponding on the roads and localized flooding in low-lying areas, especially with impressive rainfall rates per hour. 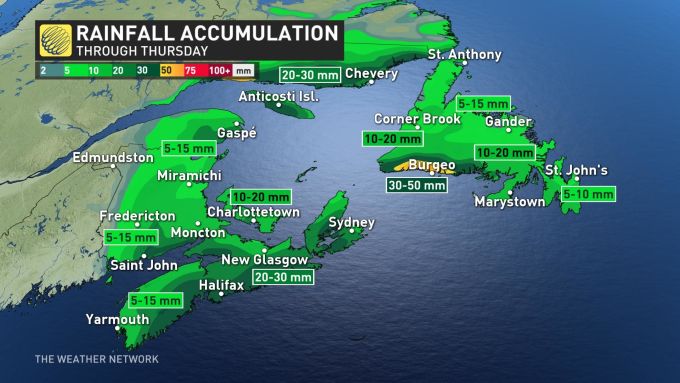 “Heavy downpours can cause flash floods and water pooling on roads. Localized flooding in low-lying areas is possible,” says Environment and Climate Change Canada (ECCC) in a rainfall warning issued for Nova Scotia. “Watch for possible washouts near rivers, creeks and culverts.”

This won’t be the end of the stormy weather, either, as another late-fall-like storm will track north of the region this weekend. This will bring another round of rain, spreading from west to east across the region late Saturday through Sunday.

Double-digit temperatures will once again surge across much of the Maritimes Saturday before they fall on Sunday. Another round of unsettled weather expected mid- or late next week.

Stay tuned to The Weather Network for the latest forecast updates for Atlantic Canada.