Thousands have marched in “Invasion Day” protests in each capital city across the nation, to fight for Indigenous rights and for the date of Australia Day to be changed.
While January 26 is formally recognized as marking the date Captain Arthur Phillip’s raised the British flag at Sydney Cove in 1788, it has become a painful reminder for many Indigenous communities.

Many protesters are holding signs and wearing t-shirts saying “always was, always will be Aboriginal land”.

Some Indigenous protesters are calling for a “no” vote on the Voice referendum, demanding that Indigenous sovereignty not be granted by a vote from a mostly non-Indigenous population.

Melbourne’s protests were held on Naarm land at Parliament House on Spring Street.

It’s billed as a chance to “remind the city we don’t celebrate genocide”.

Adelaide’s Survival Day march began at noon and will finish at 4.30pm at Tarntanyangga (Victoria Square), in the city.﻿

Perth’s Invasion Day protest is set for noon on Forrest Chase in the city.﻿

In Tasmania the Nipaluna Invasion Day march started at at 198 Elizabeth Street before heading to the Parliament Lawns for a midday rally, which is pushing to change the date.﻿

Despite the protests, polling suggests the majority of Australians believe we should have Australia Day on January 26. 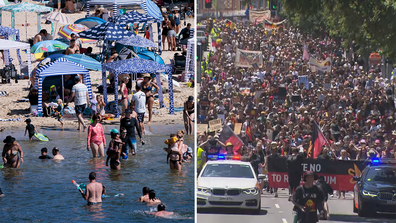 Sign up here to receive our daily newsletters and breaking news alerts, sent straight to your inbox.