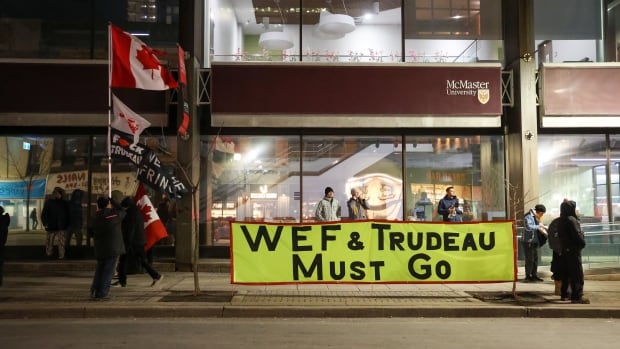 Prime Minister Justin Trudeau and his ministers gathered in Hamilton this week to plan a path forward for the new parliamentary sitting that begins next week — and they’ve been pursued by protesters at nearly every turn.

A small but vocal group of roughly 20 protesters has set up outside Trudeau’s hotel and the site of the retreat. The protesters have used techniques similar to those deployed by the protest convoy that converged on Ottawa a year ago.

The Hamilton crowd has shouted at the prime minister at all hours of the day — taunting him with chants of “tyrant” and “traitor” and cries of “f*** Trudeau,” while carrying flags and signs bearing the same messages.

One protester has carried a “We love the fringe” flag — a reference to Trudeau’s past comment that anti-vaccine elements in Canada constitute a “fringe minority.”

They also have been honking car horns in the early morning hours.

Some of the protesters have draped themselves in the Canadian flag, a fashion choice that was followed by some anti-vaccine mandate protesters on Parliament Hill last year.

The demonstrators are vehemently opposed to the prime minister’s handling of the COVID-19 health crisis and his policy of vaccine mandates for travelers and some cross-border workers — policies that were dropped last year as part of a push to return to pre-pandemic life .

The protesters also have been carrying signs denouncing the World Economic Forum (WEF), a non-governmental organization that hosts discussions between world and business leaders at an annual summit in Davos, Switzerland.

The WEF is at the center of many COVID-related conspiracy theories because, in 2020, some of its leaders talked about a “great reset” after the health crisis — a chance to evaluate how the global economy is structured after grappling with such a devastating pandemic.

On Tuesday evening, as Trudeau and his cabinet walked across the street to a local restaurant for dinner, a crowd gathered — prompting the RCMP protection detail to close ranks and shuffle him into the hotel through a side entrance to avoid some angry elements of the crowd .

The demonstrators pounded on the windows of the restaurant, Bread Bar, a move that unsettled a number of the cabinet ministers inside, sources said.

Trudeau reacts to being swarmed by protesters in Hamilton

Prime Minister Justin Trudeau says a ‘handful of angry people’ do not define ‘democracy in this country.’

Some cabinet ministers also shielded their colleagues from the demonstrators as they surrounded Trudeau and his entourage on the walk back to the conference complex, said sources, who spoke on the condition of anonymity.

The Bread Bar protesters also carried an inflatable sheep wearing a face mask, with a sign that read “99.8 per cent survival rate” — a reference to COVID-19.

On Monday night, the protesters launched fireworks at the hotel building — pelting the windows of the mezzanine-level bar — prompting the considerable security presence assembled at the hotel to lower the blinds and discreetly move Trudeau away from the windows.

The fireworks were back again Tuesday evening as protesters directed their firepower at the windows of the 301-room Sheraton Hamilton Hotel. Trudeau wasn’t in the room as the fireworks bounced off the building.

There are local police and RCMP officers stationed at all entrances in and out of the hotel-conference center complex. They’ve blocked some people who are thought to be part of the demonstrations from entering the space.

About a half-dozen protesters were on hand at the city’s McMaster Automotive Resource Center as Trudeau toured the facility and spoke to reporters about an upcoming federal-provincial summit on health-care funding.

“F*** you, Trudeau,” one of them shouted as police kept protesters at bay, and as Trudeau and his ministers hopped in their cars to head back to the conference center.

CBC News has asked Hamilton Police if anyone has been arrested for their involvement in any of these incidents but has not yet heard back.

Asked about the security situation Wednesday at the retreat’s closing news conference, Trudeau said he doesn’t think the demonstrators represent the people of Hamilton.

“Let me say that the welcome that I’ve gotten here in Hamilton has been extraordinary. The people I’ve met, the students here, the folks and teams that I met in various places during our couple of days here have been thoughtful and open and warm,” Trudeau said.

“And a handful of angry people do not define what Hamilton is or what democracy is.”

WATCH: Trudeau reacts to being swarmed by protesters in Hamilton

A crowd gathered outside the venue where the prime minister and his cabinet members were dining to protest the government’s Covid 19 policies.

Trudeau said it’s “really important” that people “express their disagreement or displeasure or even anger with various governments.”

“Our police services and institutions will ensure that those protests remain peaceful and law-abiding,” he added. “That’s something that really matters. We will always ensure that people are free to express their perspective.

“But I want to make sure that everyone understands that a handful of people don’t represent Hamiltonians.”